Since 1993,  photoelectric sensors (aka photo-eyes) have been required on garage door openers.  The CPSC recommend this change to “reduce the number of deaths to children who become entrapped under garage doors with automatic openers.”  I’m not saying it’s a coincidence, but after watching Indiana Jones roll under that temple door in 1981, it pretty much became obligatory for my brother and I to start diving under closing garage doors.  While I don’t think you can blame the Barraza boys for this change, it may well have been our generation that prompted it.

How they work
Photo-eyes work by sending an infra-red beam between the two sensors, and if something were to interrupt the beam while the garage door is closing – the opener will reverse and open again.  The sensors need to be properly aligned for the system to work, and some crafty  (aka devious) folks have figured out ways to defeat this safety feature.  (See photo below) Sensor placement
So if the sensors aren’t supposed to be hiding in a secluded spot near the ceiling, where should they go?  DASMA 364 recommends a maximum hight of 6 inches off the floor, and 6 inches horizontally away from the door.  Again, the idea is to protect children from entrapment, and having the sensor too high, or to far away from the door is not good.  In the photo below, the sensor is almost 3 feet above the floor, defeating it’s purpose.

A photo eye that is too high

How to test
If you are curious about the function of your garage door photo-eyes (and you should be, especially if you have children), the good news is that they are easy to test.  While the garage door operator is closing, simply walk to the sensor and interrupt the beam with your foot.  The opener should reverse, and once the door is fully open, the opener light will typically blink.  The the garage door doesn’t reverse, somethings wrong – time to get it fixed.

I wanted to let you know that Dave Pagano did an excellent job with the inspection we needed. He showed up and was ready to start on time, was extremely professional, and addressed all of our concerns and then some. His report was extremely detailed and was returned in a timely manner. If we need any more inspections done in the area or if I know of anyone who needs one, I will definitely recommend your company.

Find out if your appliances are subject to a recall, a free repair/replacement: 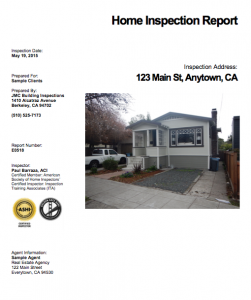